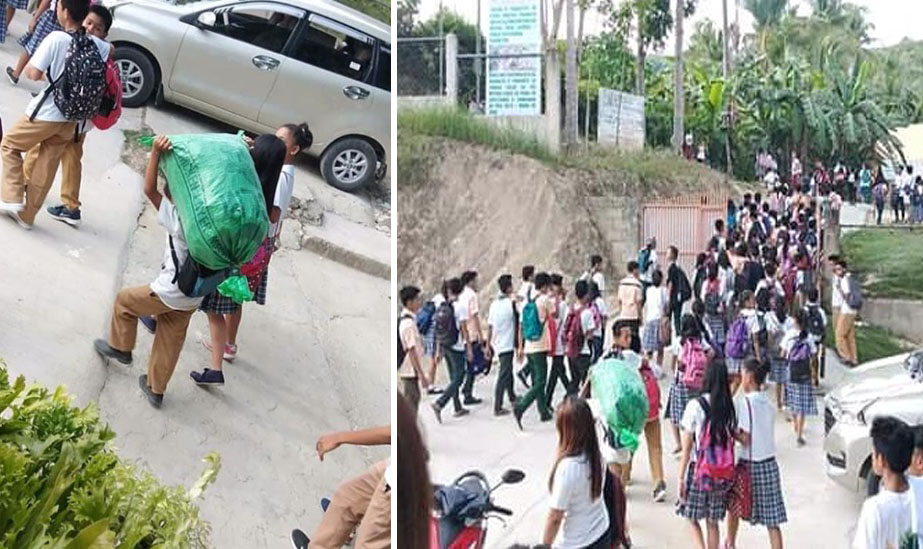 It was really a sad reality that a lot of people can oftentimes take for grant the things and the privileges they have in their everyday lives. There were a lot of young people nowadays who often forget to be grateful with all the things they have now, even from the simplest thing they had like the food on their table, their shelter, clothing, gadgets, and even the privilege of education. No wonder that this young student captured the hearts of many people because of his what he did in school.

This young boy in Argao, Cebu went viral online after his teacher, Je-Ann Montejo, a teacher at Usmaad National Highschool in Argao Toown, Southern Cebu shared photos of her student carrying a sack of uprooted grass he got from their school to feed their cows at home.The teacher noticed that the kid was carrying sack of rice for two consecutive days already after class’ dismissal. She then asked her student about it. The grade seven student, Arkim Camello answered his teacher and explained that the sack he was carrying has grass inside it that came from the school garden during their TLE-Agriculture “exploratory” class.

He even added that he asked permission from his class adviser, Rosemarie Diotay if he could take the uprooted grass at home to feed their cows. The teacher posted on her caption about those students who continue to take for grant a lot of opportunities given to them so easily and effortless, but this young student really has something to prove when it comes to being a good person, a good son, and a good student.

A lot of people praised the kid as he was not afraid of being teased by his friends and schoolmate as he was carrying a heavy sack home. He also didn’t mind what others may think or say as long as he can do some help for his family at home.

These students earned praises from the public as they helped a hungry child with only P4 in his pocket!