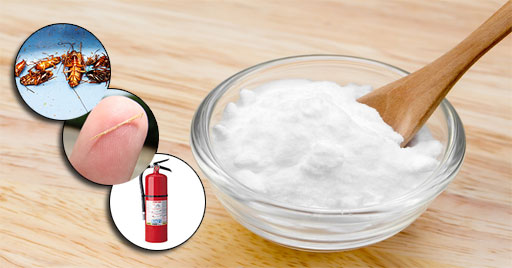 Baking Soda is primarily used in baking as leavening agent because it reacts with acidic components and releases carbon dioxide which causes expansion in cakes, pancakes, breads, and other baked and fried foods.

Baking soda gained its undeniable popularity because of its numerous surprising uses and these are things that baking soda is capable of,

Fire extinguisher – if something fiery happens in our kitchen, baking soda can be used to extinguish the fire by throwing it over the fire.

Anti-acid – baking soda mixed with water can be used to treat acid indigestion and heartburn.

Treats blepharitis – a common ocular condition characterized by reddening, scaling, inflammation, and crusting of the eyelids. A cooled recently boiled water with baking soda can be used to treat blepharitis by gently scrubbing the eyelash base with a cotton swap dipped in it.

Splinters – if your skin was embedded by splinters, baking soda can be useful.

Teeth whitening – toothpaste containing sodium bicarbonate or baking soda have been shown to have a better whitening effect to teeth.

Soda-blasting – a process for cleaning aluminum panels and other types of distorted abrasives using baking soda.

Rust – baking soda is used with cold water to removes rusts. Avoid using hot water because it can corrode steel.

Stains – heavy tea or coffee stains can be removed by baking soda by diluting cups to warm water.

Businesses that you can start with only P10,000 or below as capital!